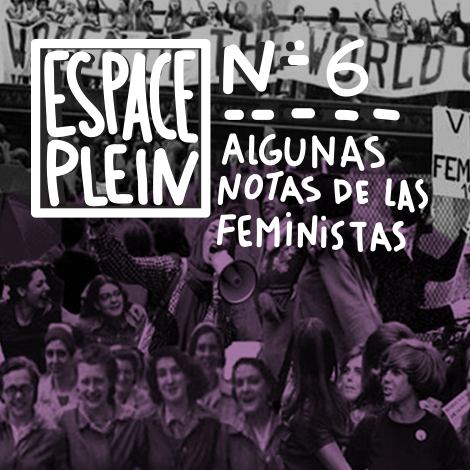 Espace Plein #6 is a journey through the sound space of March 8 in the street, collecting some testimonies about territories of debate in which we still have the duty to position ourselves and the superposition of pieces of experimental music based on the contextualization of women in public and private space, based on the reflections of the artist Martha Rosler and her semiotics of cooking, through Juliana España. The perspective of sound and singing as a territory of experience and empowerment, as is our sound representation in the territory of the public, in what it says in how it is said, how we move our body by how it resonates within us. #Thanks to all the compañeras who took to the streets on March 8th, this piece goes to each and every one of those who sustain the fabric of affection and care, all those who are invisible, the compañeras putas, the trans compañeras, the migrants, the compañeros who tend to ties towards new socio-political constructs. Thanks to Juliana España and her pieces of experimental music and her approach to the new materiality, thanks to the companions who welcome me and tuck me in despite the difficulties, thanks to Umar and the women who participated in the body and sound art workshop, thanks to each and every one of those who risk their necks every day to build and believe in a new world.

Produced by Ursula Bravo, for TeslaFM.